The Ko-ro-ban Dance troupe is the oldest and best Gorean dance troupe in Second Life. Master Dingo Night is in charge of the Dance Troupe.  We entertain during the Ko-ro-ba Sword Tournaments, Ko-roba Tarn Races, and Kaissa games. We also do special appearances for the productions and other events in the City of Ko-ro-ba. The troupe is widely known and sought out by dancers in every gorean city.

History: Our first leader was slave, maralyn Demar, who gave this account of our history…
“The Ko-ro-ba dance troupe was conceived and created by maralyn demar with permission from Ubar and her (then) Master, Wolfe Deckard (at that time, First Sword of the City). The purpose was to greet Ubar’s guests,
entertain the free and cheer on the men of Ko-ro-ba. There had not been anything like this in Second Life Gor before. Ko-ro-ba was the innovator of the large, syncronized dance chain at Gorean tournaments!

maralyn contracted with a top designer to create the dance outfit in City colors of Red and Black. That same outfit is still used today. It is the only outfit of it’s kind, was put together specifically for the Ko-ro-ba team and was not sold
to anybody else.she first put the dance troupe together for the very first Tournament of Towers in November,2006. It’s purpose has been to entertain and please the free of the City and it’s guests. Itstarted out as much of a
“Cheerleading Squad” as a dance troupe. The dance troupe even had pom poms initially, but were done away with when too many Free complained of the immense number of prims on each of them. Since that time, the dancers
have performed at every tournament in the City.”

maralyn also did the choreography for the productions of Ko-ro-ba for the years that she was First girl. maralyn demar was the leader of the troupe until real life called her away in December of 2009.

Here is a picture of maralyn Demar: 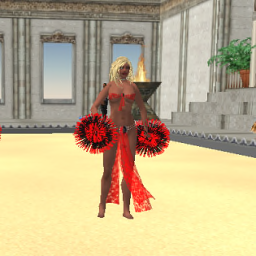 Our second leader was tersa Vella, who continued the account of our history…

“tersa Vella, owned by Master Deka Ansar, the Second Sword of Ko-Ro-Ba, was given the position of first girl of the dance troupe by the First Sword, Master Dingo Night. tersa added the double hud method that is used to dance
the girls and backup in case of hud failures or SL crashes. tersa incorporated an invite list as a pre-fight task for the dance troupe by combining falcon nacon’s invite list to many other names of Gorean Free that were accumulated
from Gorean Events. This list is still maintained, used, and added to and by the dance troupe today. Invites are sent out all over Gor by an automated inviter before each Tournament of Towers in Ko-ro-ba.

tersa asked Ubar Scar Statosky if a camisk for the dance troupe could be made to give the girls a low prim alternative to the dancing wardrobe that will help with lag for when the troupe leaves the dancing platform and returns to
the audience side. she asked sugardc pexie, slave of Master Paladin Falconer, Warrior of Ko-ro-ba, if she would design a few for the Ubar to select which one He wants for the troupe, which she did. Ubar liked all six camisks that
sugar made and gave them as a Valentine’s Day Present to all the slaves of Ko-ro-ba in February, 2010. The camisks are ocassionally used by the dancers when on stage as well for a change-up in the dancer’s costumes.

Here is a picture of tersa Vella 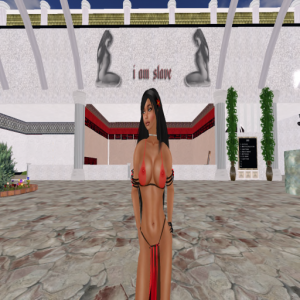 The third leader was brit Darbyshire, with this account of our history…

The next leader of the dance troupe was brit Darbyshire, owned by CommanderKiwi Braveheart, a Physician of Ko-ro-ba and then later by DevonDarkly Resident, a Scribe of Ko-ro-ba. brit Darbyshire was made First girl of the
dance troupe by Master Dingo Night, First Sword of Ko-ro-ba, on March 16th, 2010. Her contribution to the troupe was to obtain permission to add girls from cities outside of Ko-ro-ba to dance in order to increase the dancers for
the many events that occurred in the City. This included some special rules that needed to be followed, and those were supplied by the First Sword of Ko-ro-ba. Also, she contributed along with her Master and the First Sword in
automating the invite list for the Tournaments.

brit also lead the dancing for the Ko-ro-ban Dance Competitions and did choreography for the two productions for Ko-ro-ba along with maintaining the invite lists for the Tournaments.. After the passing of la’dina fauna, brit took
over the broadcasting of the Tournament of Towers. Sugardc Pexie and Elli Letov took over dancing the troupe at this time.

brit worked on broadcasting the Tournament of Towers, overseeing the Ko-ro-ban Dance Troupe, and managing the two productions for Ko-ro-ba until real life duties called her away March 2014.

Here is a picture of brit Darbyshire: 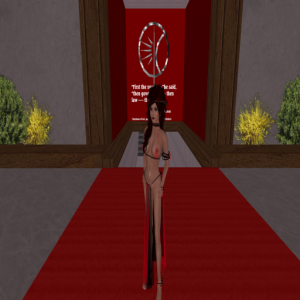 The fourth leader was Sugardc Pexie, with this account of our history…

Sugardc Pexie was selected, with the approval of Master Dingo Night, by brit Darbyshire due to her tireless work of already dancing the troupe for a very long time after la’dina Fauna’s passing. Sugardc Pexie is owned by
Master Paladin Falconer, Sword of Ko-ro-ba. Her contribution to the troupe was to extend the troupe’s service to dance for the Free at the Kaissa games and also the Ko-ro-ba Tarn Arenas. Sugar’s dedication has been
tireless in organizing the dancers for events that are most days of the week. she also has added many new outfits to the troupe, making the girls visually appealing for the Free. 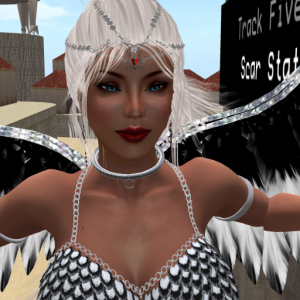 The fifth leader of the Dance Troupe is lala Roussel, with this account of our history…

Here is a picture of lala Roussel: 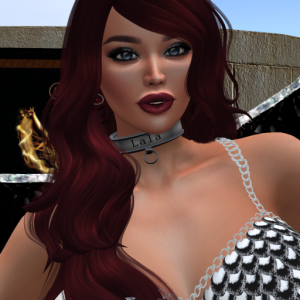 The dance troupes leaders have always strived to make this group a fun and exciting group to participate in. The dedication, great attitudes of the dancers, and the support given by the Free have really made this group what it is today. Slaves seek to join the group because of it’s reputation and true service that it provides to the great City of Ko-ro-ba.  If you wish to be a part of the Ko-ro-ban Dance Troupe, please message lala Roussel in second life world.